Normally HuffPost is useless. This story is too good to bypass.​ 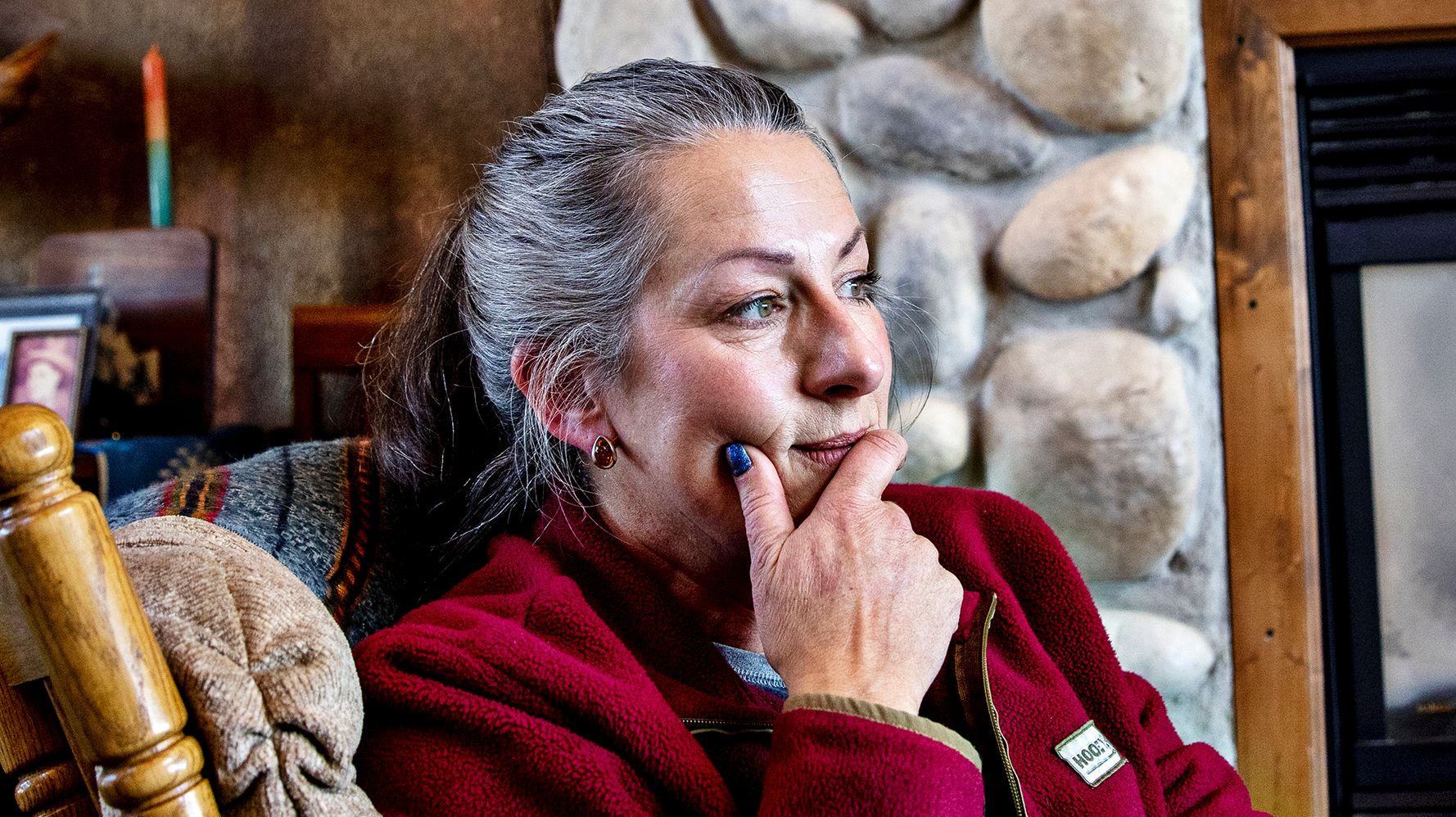 Living With The Far-Right Insurgency In Idaho

A radical GOP faction, in open alliance with extremists, is seizing power and targeting its opponents with cruelty. Some wonder: Is it time to leave?

Living With The Far-Right Insurgency In Idaho​

A radical GOP faction, in open alliance with extremists, is seizing power and targeting its opponents with cruelty. Some wonder: Is it time to leave?
By
Christopher Mathias
May. 17, 2022, 05:45 AM EDT | Updated May. 19, 2022 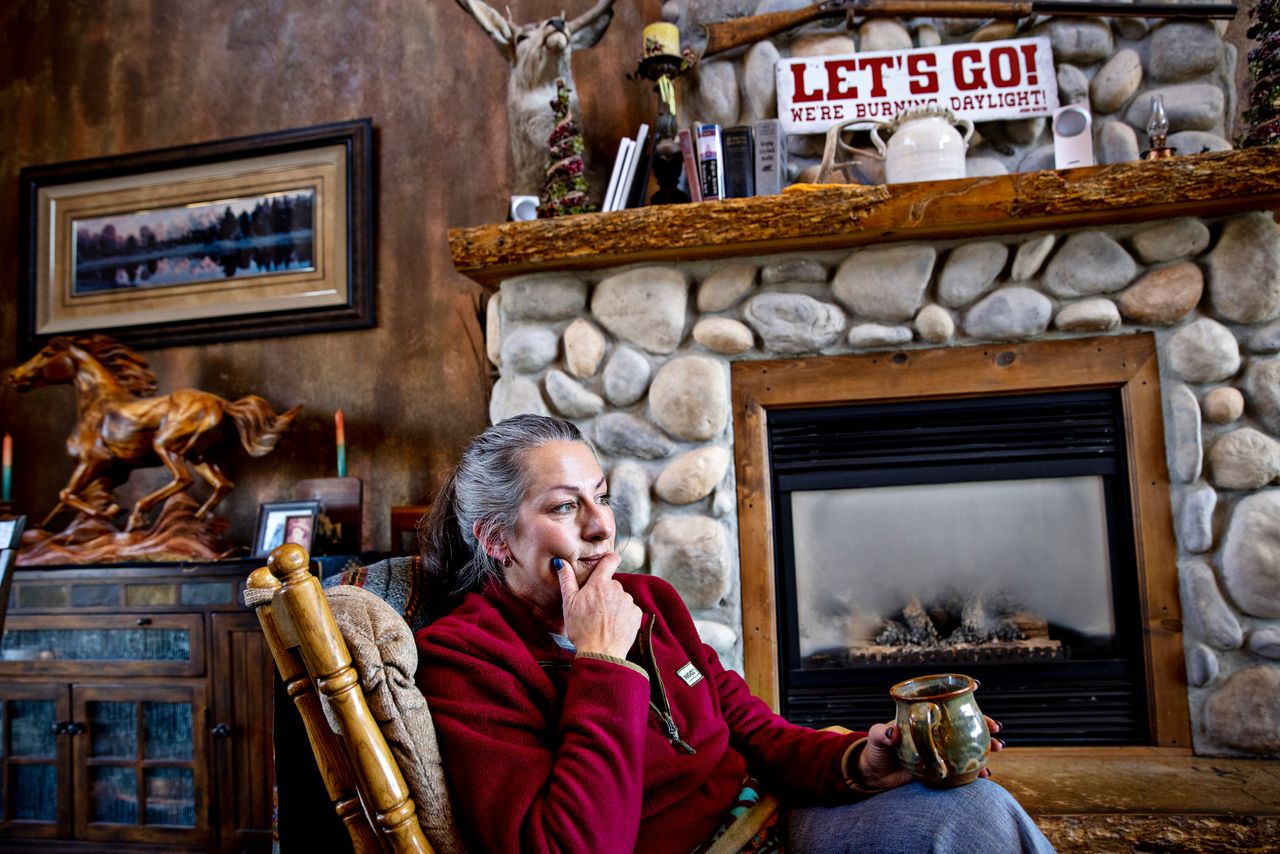 Jennifer Ellis, photographed in her home on April 3, 2022, created Take Back Idaho to push back against the right-wing, extremist views and tactics that have dominated the state's politics.
Kim Raff for HuffPost
IDAHO — White nationalist Vincent James Foxx had a new video for his nearly 70,000 subscribers on BitChute, one of the few tech platforms that hasn’t banned him. On Feb. 16, he appeared wearing a baseball hat emblazoned with the state’s outline tilted on its side so that it resembled a pistol.
“We are going to take over this state,” Foxx declared. “We have a great large group of people, and that group is growing. A true, actual right-wing takeover is happening right now in the state of Idaho. And there’s nothing that these people can do about it. So if you’re a legislator here, either get in line, or get out of the way.”

Foxx, 36, isn’t from Idaho. He only recently moved from California to Post Falls. But in the video, he showed off photos of himself posing with a string of prominent Republican politicians in the state as he explained who he’s supporting in the upcoming primaries, slated for May 17.
He was especially excited about a selfie he’d taken a week prior: It showed him and fellow white nationalist Dave Reilly, a recent Pennsylvania transplant also living in Post Falls, standing alongside Idaho’s lieutenant governor, Janice McGeachin. All three were smiling.
“We’re supporting her,” Foxx said, bragging of his movement’s “deep connections” to McGeachin, whom former President Donald Trump endorsed in the GOP primary race for governor. Foxx then explained how his particular brand of Christian white nationalism is poised to conquer Idaho, then the country.

“The solution is local politics: Amassing power in these pockets of the country until it’s time to unify,” he said. “I’ve only been here for a couple of months and I’m tapped in the way that I am. You can do it too.”

Fascists like Foxx are famous fabulists, experts at exaggerating their influence and success. But Foxx wasn’t just talking shit.
He is one of many far-right activists who have flocked to Idaho in recent years, where a large and growing radical MAGA faction in the state’s Republican Party has openly allied itself with extremists to a shocking extent, even for the Trump era. This faction is accruing more and more power in Boise, the state capital: Imagine a statehouse full of Marjorie Taylor Greenes and Steve Kings. At the local level, they have seized seats on school boards and county commissions at a fast clip.
They’ve accomplished this, in part, by targeting their opponents with frightening cruelty and harassment, embracing a strategy called “confrontational politics,” which has helped drive more moderate officials across the state to resign or retire.

Left, white nationalists Vincent James Foxx and Dave Reilly pose with Idaho Lt. Gov. Janice McGeachin, who is running for governor. On the right, a screenshot from one of Foxx's livestreams shows his hat featuring Idaho tilted like a gun.
Vincent James Foxx/Daily Veracity
A lot has been written about both the radicalization of the Republican Party and the decline of democracy in the U.S. — about the country being at a precipice. It’s maybe easy for those warnings to become background noise, or to dismiss them as doom-mongering pieces of clickbait. But in Idaho, the nightmare scenario is crossing into reality, as an authoritarian GOP sets about to create a whiter, Christian nation.

These MAGA radicals have gestured at the future they want: no rape and incest exceptions to Idaho’s abortion ban; no emergency contraception; no gender-affirming health care for minors; the banning of books; the jailing of librarians; and maybe no public education altogether.
I recently spent a week traveling across the state, from Sandpoint in the northern panhandle down through the green slopes and whitewater of Hells Canyon to the plains of Ada County, and then across lava rock and sagebrush to Blackfoot. In all these places, Democrats and more moderate Republicans viewed Tuesday’s primaries as an existential affair. Some are considering leaving the state if MAGA extremists consolidate more power. Others are digging in their heels.

It is a long article, read at site
Black Death and Abrupt Earth Changes 02-01-2018 updated version PDF
“The welfare of the people...has always been the alibi of tyrants, and provides...the servants of tyranny a good conscience.” ~Albert Camus
14.88 Mystery: $14.88 is everywhere!
You must log in or register to reply here.
Share:
Facebook Twitter Reddit Pinterest Tumblr WhatsApp Email Share Link
Top