AN searching for larger compound in Oregon

AN searching for larger compound in Oregon

JOHN DAY - Leaders of the Aryan Nations in Idaho say they want to move the headquarters of their white supremacist movement to Grant County.

Paul R. Mullet, who called himself national director of the movement, was in John Day this week, looking at property to buy for a new "national compound."

The visit stirred concern in many quarters, where residents worried about the neo-Nazi sentiments of the movement and the negative impact that it could have on the community.

The group teaches that the white race is the only one descended from Adam, and that Jews and non-whites are the natural enemies of white people. The mission, outlined on the group's website, is to create a state for the "Aryan race," separate from all non-whites, and a "lawful Congress of our race."

Mullet, wearing a uniform shirt with a swastika patch on it, said the group's goal is to create a homeland for white people.

"That area is the Pacific Northwest," he said. "The blacks have Africa, the Jews have Israel ..."

Mullet said his group's current headquarters is in Athol, Idaho, but it doesn't have the attributes of a real compound. If they can find the right building in John Day, he said, they will be able to provide barracks and space for training recruits, as well as a place for meetings and gatherings.

He wants to hold a national gathering in the county in September 2011.

Mullet said the group was drawn to the remoteness of Grant County, the relatively low cost of property and "the proximity to the mountains" for survival training.

They were particularly interested in two properties, the old junior high building on Bridge Street and the vacant church or opera house building on Dayton Street.

He declined to say where the money for such a deal would come from, but said they would pay cash "from legal means."

Newell Cleaver, School District 3 superintendent, said the junior high building is no longer being actively marketed because the district is pursuing discussions with the Grant County Library Foundation about a possible sale and development of a library there.

The other building is up for sale, but the listing agent had not received an offer late Wednesday.

During his John Day stay, Mullett was accompanied by two Grant County residents: Jacob Green and Christopher Cowan, and Leif Berlin, described on the group's website as the Washington state leader. Green, of Mt. Vernon, is the Oregon state leader for the Aryan Nations, and Cowan was described as a sergeant in the state organization.

They denied that Aryan Nations is a hate group, although their website calls Jews "parasites" and other names, features a Nazi tribute on video, and includes a section of crude references and manipulated photographs of black people.

While staying at a local motel, they opened the door to their room to clearly display Nazi-style banners as two employees - a black and a Hispanic - went about their work.

Motel officials said people in two other rooms vacated before their stay was up because of concerns about the white supremacist group.

Mullet's group said they don't expect any conflict with people in Grant County.

"This is a good fit with the values here," he said. They said members would do community service projects and patrol the streets, making it safer for the residents who live here. They also contended their group would bring money to the economy by drawing more supporters to visit and live here.

Norm Gissel, a Coeur d'Alene, Idaho attorney, disagreed. He said the neo-Nazi movement had a chilling effect on tourism and property values in northern Idaho during its heyday under Richard Butler, the founder of the Aryan Nations church who has since died.

Gissel spearheaded a civil rights lawsuit that bankrupted that Aryan Nations organization and Butler in 2000.

Asked about this group relocating to Grant County, Gissel said, "From an economic standpoint alone, you don't want that to happen in your community."

He said communities need to be vocal and firm in resisting the establishment of such groups.

"You've got a potentially serious problem, and the time to start organizing is right away," he said.

John Day Mayor Bob Quinton was dismayed at the prospect of the group moving to town.

"That's the last kind of thing our reputation needs," he said. "We need to be inclusive and emphasize positive things here."

Vices the most notorious seem to be the portion of this unhappy [negro] race: idleness, treachery, revenge, cruelty, impudence, stealing, lying, profanity, debauchery, nastiness and intemperance, are said to have extinguished the principles of natural law, and to have silenced the reproofs of conscience.--Encyclopaedia Britannica, 1798.

A handful of turncoats, hundreds of supporters

JOHN DAY, Ore.—A white supremacist group thinks an empty building in this once-thriving timber community would be a good place to establish a compound. But citizens are protesting the idea and the leader of the Aryan Nations Church of Yahweh is threatening to sue the small town should it try to block a purchase. 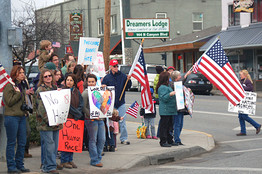 The Idaho-based group's leader, Paul R. Mullet, 36 years old, said in an interview that he intended to purchase one of two empty buildings in the town, whose 2,500 residents make it the largest community in rural Grant County. 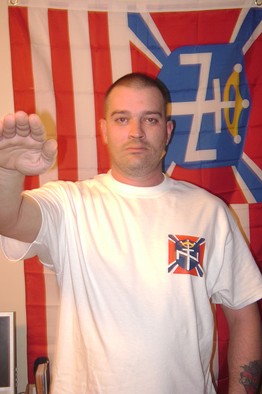 The Connecticut-size county lies midway between Portland and Boise, Idaho. Like much of rural Oregon, it has been plagued by high unemployment during the recession.

The properties he has in mind are a former junior high school and an abandoned opera house, whose construction harkens back to more-prosperous times. Mr. Mullet also proposed to use the surrounding forests for survival training of members, and said he hoped to have the grounds prepared in time to host a national convention of his movement in 2011.

News of his plans sparked a protest march last Monday at the nearby county seat of Canyon City, then two town-hall meetings on Friday.

Mr. Mullet declined to quantify the membership of Aryan Nations Church of Yaweh, which he called "a private number."

He said that on advice from his attorney he wouldn't discuss further his plans to purchase real estate in John Day.

Whether or not the town is able to block the sale is questionable. Oregon has antidiscrimination laws, but nothing on the books specifically regarding discrimination based on politics.
Vices the most notorious seem to be the portion of this unhappy [negro] race: idleness, treachery, revenge, cruelty, impudence, stealing, lying, profanity, debauchery, nastiness and intemperance, are said to have extinguished the principles of natural law, and to have silenced the reproofs of conscience.--Encyclopaedia Britannica, 1798.
You must log in or register to reply here.
Share:
Facebook Twitter Reddit Pinterest Tumblr WhatsApp Email Share Link
Top